This week we’ve begun a remodeling project. We weren’t planning on it just yet, but our tub had other plans. A few months back we noticed a crack in it, so it did not matter if we were prepared for a remodel or not, we, or rather it, decided it was time.

We called our contractor. Yes, we happen to have one. When you have a house that was built in 1930, you tend to keep one on speed dial. So my husband called Scott and warned him that we were going to need his help. This was a project that was beyond our abilities and, quite honestly, beyond our desire for manual labor. We can handle installing a new sink or tiling a floor, but we figured we better call in reinforcements.

We knew we wanted to do away with the tub and just go with a nice walk in shower. It took us a while, but we found exactly what we wanted. Panels that would go all the way to the ceiling, a cast iron pan and tall barn style glass shower doors. The shower pan will come out a couple of inches more than the original tub did, so then we had to look for new flooring. We have already returned the first tiles we bought and are sure we will be happy with the porcelain tiles he is about to install. If we are going to put in a new floor, we might as well replace the vanity. I have been wanting a raised vanity for years. We picked up a great solid wood and marble top one. The walls are nice, but since they have to tear out the tub and shower, the drywall will come down, so we like the idea of adding some beadboard. You can see where this is going. The only thing we are keeping is the toilet. It’s only a couple of years old, so hopefully all goes well moving it out and in.

It took the shower walls and pan a few months to come in, so our contractor finished up some other jobs and just got started this week. We figured it will take about 3 days and we would be able to shower again. We only have one bathroom. They do this kind of stuff on HGTV all the time. It doesn’t seem that hard.

In an afternoon, the bathroom was gutted! Whew, that was quick. Out with the old and in with the new. We could tell that this was not the original location of the bathroom. As I said, the house was originally built in 1930. There was a major remodel about 20 years ago before Mick bought it. You could see the original dark wood and newer framing. It’s amazing to how big a bathroom looks without anything in it. 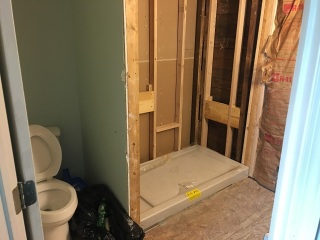 Scott has been great about keeping water going for us. We have a toilet still and water in the kitchen. This adventure began 4 days ago. We thought about going to a hotel here in town until it was done, but we are comfortable here at home. We just need a good shower soon. To keep from running each other out of the house, we have been taking whore baths in the kitchen sink. I have a bathing mantra that my mother passed on to me from her mother. When taking a bath: wash down as far as possible, then wash up as far as possible, and by all means – don’t forget possible! That’s right, I don’t remember my mother ever telling me I had to wash behind my ears or anything silly like that.

A couple of nights, Mick has cleaned up in a wash tub we bought to give the dogs a bath in. I call it his Hillbilly Waterpark. We live right in the middle of town, but he has managed a little privacy on the screen porch. Last night, though, a car pulled into the driveway, just as he entered the waterpark. It seemed they were just turning around, but their headlights almost caught a full moon!
It reminded me of Ray Steven’s “The Streak” from the 70’s. Don’t Look ETHEL!!

We hope the bathroom will be done in the next week. While we have Scott here, we thought we would have him knock out a short list of other projects too. Now if you will excuse me, I have to go. The sun is setting and the moon is about to shine. I have to go heat up some water, the waterpark will be opening shortly.