A Tale of four siblings

Since today is #NationalSiblingsDay, I thought this would be the perfect opportunity to write about the three other people in my life, that know as much about my growing up as I do. I am the youngest of four boys. I don’t know how my parents survived as long as they did. Both of them are gone now, but they did see us into adulthood, or at least past the age of 32. Being adults is something I think we are all still struggling with.
My parents had the four of us in the span of just five and a half years. We are probably closer now than we were when we were kids, but that’s just a part of being family. You don’t always appreciate what each other brings. After all they’re just family, what do they know! I think all of us being in a relatively small house, made us want to expand our own worlds a little bit. Now we can appreciate, even if we don’t necessarily understand, what we each bring to our relationships.
Our parents always made sure that whatever they did for one of us, they were able to do for all of us. One year for Christmas, we all got new bikes. Lots of Christmases we would get up to find each of us had our own pile of presents, with our names next to them, where Santa had written a note to each of us. And, both our parents came by it honest; the idea that we be treated equally. Grandmaw Edge once made us all robes for Christmas, and in the pocket of each one was a small Whitman’s Sampler. Grandmaw Barton didn’t often give us presents, it just wasn’t done. But, every now and then, we would each get a Kennedy Silver Half Dollar.
My brothers and I, at times, seemed to test the boundaries of life and limb. The registrar at the ER knew who we were when we came in and would simply ask “Which one is it this time?” There were sprains and broken bones, minor stabbings with an inanimate object or two, and trips over the handlebars of our bikes. Yes, two of my brothers did that.
There was one afternoon that I was playing in the front yard, when suddenly I felt something sting my knee. I looked down. I didn’t see anything, but man did it hurt. I started rubbing it and then I heard someone laughing. I looked up, only to find my oldest brother, hanging out of a bedroom window, laughing his fool head off. I also noticed the BB gun in his hands. A laugh and a point was all it took. I let out the most blood curdling scream I could manage. Mom didn’t know what had just happened either, until she looked up. My brother suddenly stopped laughing and hiding was not an option. She was in the house and at the doorway before he had time to pull himself back in the window. As I said, our parents believed in treating us equally. So, since I felt pain from the BB gun, so shall my brother. She turned that thing around and with one whack, the butt end met the butt end. It was snapped in two after that, but I think he managed to salvage it for a little while. He never shot me or anyone else again, that I know of.
We didn’t always try to hurt each other. Sometimes that was just part of the fun. We were there for each other when it counted. That is also part of being family. My brothers all have kids now and even as cousins, they treat each other like siblings. Hopefully not as intensely as we did, but as importantly as we do. So, Happy National Siblings Day to my brothers, and now to my sister-in-law and brother-in-law. 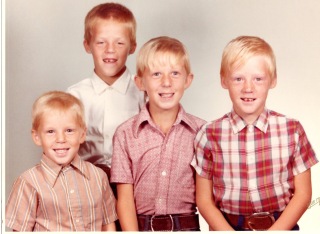 ← Lye soap is a true Tale
Good Night no more →

I couldn’t pick just one favorite pie for #nationalpieday Sweet or savory, pie can be an appetizer, dinner, and dessert. Heck, I’ll even eat pie for breakfast! Mary taught me to make the best pie dough. What’s your favorite pie? #pie #nationalpieday2020 #baking #bakingfromscratch #castironbaking #ibakethereforeipie #ibakepies #piedough #piecrust #galetteispie
It’s National Southern Food Day! I hope you enjoyed something that made you feel at home, something that took you back, something that just warmed you through and through - like a skillet of brown butter cornbread, fresh out of the oven. #nationalsouthernfoodday #cornbread #southernfood #skillet #castironskillet #castironcooking #lodgecastiron
She just gettin’ started. Happy Birthday @dollyparton ! #happybirthday #smokymountainangel #smokymountains #dollyparton
Like grandpa always said “If everyone liked the same thing, they’d all be after your grandma” To each his own. I like my oatmeal with butter, brown sugar, cinnamon, pecans, and a little cream. @mickontheporch likes his with just butter and white sugar. Oh, he also has to have buttered toast with his. Lots of toast. #oatmeal #oatmealbowl #foodstagram #breakfast #warmstart #warm #cinnamon #toeachhisown #toast #thefeedfeed #feedfeed #theoldmilltn #oldmilloats #oats #thicktableoats
Such a great episode of @bittersoutherner , The Exactly Right Cake. And it features my friend and work-collaborator, @annebyrn who’s #americancake cookbook is a wealth of knowledge! You know I’m all about stories, history, and cake! #bittersoutherner #bittersouthernerpodcast #podcast #cake #history #family #inthekitchen #annebyrn #thecakedr #thecakedoctor
Biscuit trials number 2. This weekend’s batch are Baking Powder Biscuits with buttermilk and butter. They rose a bit more than last weekend’s. I think I need a wetter dough and I need to give them just a couple of minutes more in the oven. But how can you wait when the eggs and bacon are done?!?! #biscuits #bakingpowderbiscuits #castironbaking #lodgecastiron #southerncastiron #southerncastironmagazine #tasteofthesouth #tasteofthesouthmagazine #biscuittrials #biscuitweekend #thefeedfeed #feedfeed #feedfeedbaking #thefeedfeedbaking #theoldmilltn #oldmillflour
Follow The Appalachian Tale on WordPress.com